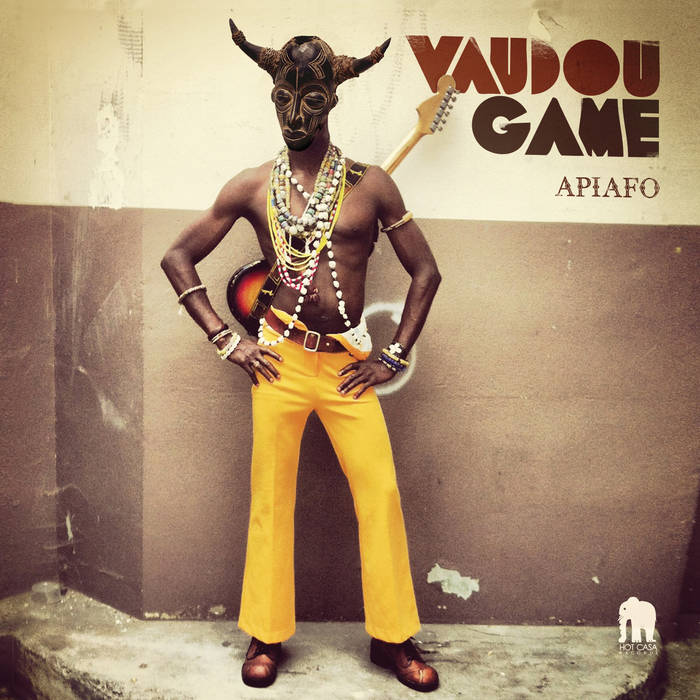 Peter Solo is a singer and composer born in Aného-Glidji, Togo, the birthplace of the Guin tribe and a major site of the Voodoo culture. He was raised with this tradition’s values of respect for all forms of life and the environment. With his new band, Vaudou Game, Peter Solo claims, and spreads this spiritual and musical heritage.
Chants are at the heart of the Voodoo practice, but for times immemorial, harmonic instruments have never accompanied them. No balafon, no kora - only the “skins” support the singers. However, in 2012, Peter, along with his band based in Lyon, France, decided to explore and codify the musical scales that are found in sacred or profane songs of Beninese and Togolese Voodoo so they can be played easily on modern instruments. Peter composed the album Apiafo, using the two main musical scales of this tradition.
The first musical scale on Apiafo leans towards raw Funk with a sound similar to the famous 70’s bands, L’Orchestre Poly Rythmo De Cotonou and El Rego. Funk, is the skeletal structure of this record, and provided the opportunity for Peter to invite his uncle, Roger Damawuzan - the famous pioneer of the 70s Soul scene - on two tracks. Their collaboration on “Pas Contente” is a highlight on this 100% analog album. Apiafo was entirely recorded, mixed and mastered with old tapes and vintage instruments.
The second scale, which had never before been transposed for instruments, evokes deeper feelings and a sacred ambiance. The moving song Ata, an invocation to a supreme divinity is another highlight of this record. Even if some can recognize similarities between this scale and Ethiopian scales, they are in fact different.
Peter, the only African band member, introduced the other musicians to the universal values of Voodoo and he taught them his native language. On the recording of Apiafo and during their live performances, the musicians all sing and answer Peter in the Mina language.
The strive for authenticity, the analog sound and vintage looks don’t mean that Vaudou Game is looking backwards. This is Togolese funk, born in the post-colonial era but that never before explored its ancient roots so deeply and proudly.